In order to conscientiously study and implement Xi Jinping's thoughts on socialism with Chinese characteristics in the new era and the spirit of the 19th National Congress of CPC and the Fourth Plenum of the 19th CPC Central Committee, We will consolidate and deepen the educational achievements on the theme of "Don't forget the first heart, to harden forward", and further strengthen the education of revolutionary traditions, firm ideals and convictions, strengthen the Party's character and cultivation, and inherit and carry forward the spirit of Yan'an, to comprehensively improve the ideological and political quality and working ability of the cadres in charge of Party affairs in an all-round way. From December 8 to 13, the Municipal Association for Science and Technology held in Yan'an Party School of Municipal Party Committee Party spirit training course of "Don't forget the first heart, to harden forward". 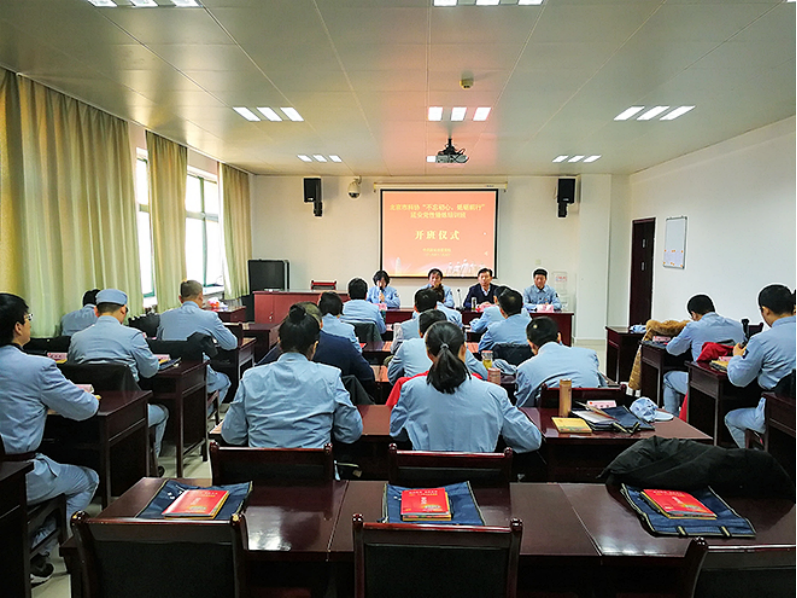 On the morning of the 9 th, the training course held the opening ceremony. All the trainees, dressed in the army uniform of the Eighth Route Army, sang the national anthem of the People's Republic of China in high spirits. Wangjiaping, Vice President, and He Hailun, Professor of Yan'an Cadre Training School of Yan'an gave a welcome speech and briefly introduced the general situation, natural resources, human tourism resources, economic and social development, special historical status of Yan'an and the running characteristics of Yan'an Municipal Party School to trainees. 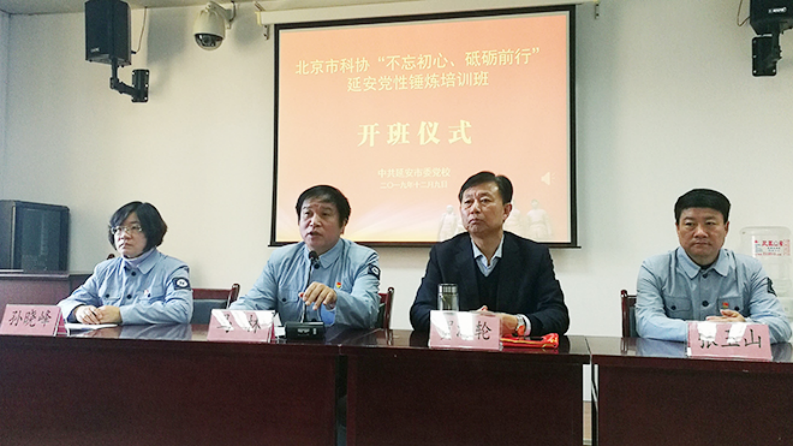 Ma Lin, the Secretary of the Party Group of Municipal Association for Science and Technology, made a mobilization speech for the opening ceremony. He expounded the significance of holding the training from the five dimensions of time, place, content, form and object. He asked all the trainees to learn to gain, to inherit and carry forward the spirit of Yan'an, to think and achieve results in enhancing the Party sprite, to realize and achieve results in improving the style of work, and to gain and achieve results in improving their ability. He stressed that all trainees should cherish this training opportunity, be serious in training discipline and devote themselves to it. In the course of experiencing the hard struggle of the revolutionary martyrs, we should review the glorious history of the Party, understand Yan'an spirit, bear in mind the original mission of the Party, and enhance the cultivation of the party spirit. Subsequently, He Hailun gave a banner to this training course. Sun Xiaofeng, Member of the Party Group, Vice-chairman and Secretary of Party Committee of the Municipal Association for Science and Technology, presided over the opening ceremony. Zhang Yushan, Second-level Inspector, General Secretary and Secretary of Discipline Inspection Commission of the Municipal Association for Science and Technology attended the opening ceremony. 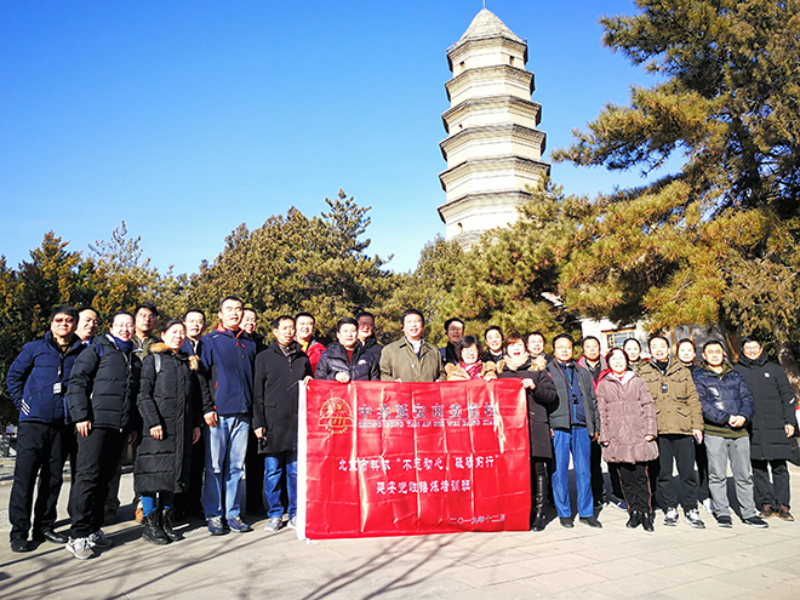 After the opening ceremony, He Hailun made a special teaching of "Yan'an spirit and its value of the times" for all the students. He made an in-depth explanation from five aspects of Yan'an spirit, including the scientific meaning, the production conditions, the basic content, the scientific system and the value of the times and so on and an in-depth interpretation of the main content of the Yan'an spirit: firm the correct political direction, the ideological line of emancipating the mind, seeking truth from facts, the fundamental purpose of serving the people wholeheartedly, and the entrepreneurial spirit of self-reliance and hard work. 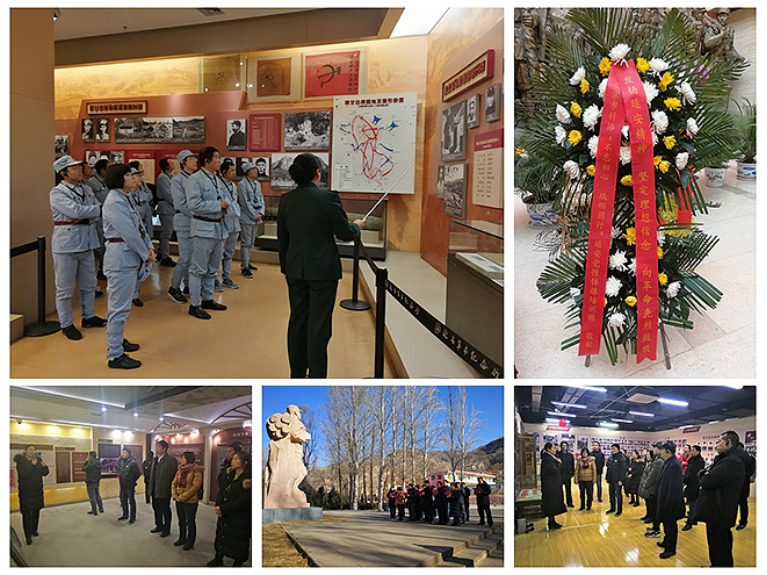 Relying on and using the red resources of Yan'an, the training courses mainly focused on the revolutionary traditional experiential teaching, and arranged a total of 1 scene teaching, 2 topic tutoring, 5 on-the-spot teachings and 8 visit teachings. The trainees went to the Yan'an Revolutionary Memorial Hall, the Wangjiaping Revolutionary Site, the Revolutionary Site of Pagoda Hill, Liangjiahe, and Yangjialing, Revolution Site of Zaoyuan, the Memorial Hall of Anti-Japanese Military and Political University, the Revolutionary Site of Phoenix Mountain, the Memorial Hall of Yan'an Press, the Memorial Hall of Northwestern Bureau, etc. for on-the-spot study. At the Yan'an Revolutionary Memorial Hall, all the trainees, under the leadership of Comrade Ma Lin, reviewed the oath of joining the Party and offered flower baskets to the statues of the older generation of proletarian revolutionaries. At the former site of Yangjialing's Central Office, all the trainees studied Chairman Mao Zedong's speech at the Yan'an Literature and Art Symposium and sang "Oriental Red". At the speech table for the people, all the trainees read Chairman Mao Zedong's famous article "Serving the People" collectively; In Liangjiahe, trainees reviewed General Secretary Xi Jinping's seven years of educated youth, pursued Xi Jinping's thought source of socialism with Chinese characteristics in the new era, constantly strengthened the Party sprite, firmly correct political direction, and keep in mind the original idea of serving the people wholeheartedly.

On the afternoon of the 12th, Hao Fengnian, Professor of the Party School of the Yan'an Municipal Committee of the Communist Party of China (Yan'an), lectured for students on "Xi Jinping's Thought of Socialism with Chinese Characteristics in the New Era" He guided them in-depth study in five aspects: the background, the main content, the basic strategy, the salient features and the significance of the formation of the socialism with Chinese characteristics of Xi Jinping in New Era. Later, the training course held a closing ceremony, and Sun Xiaofeng made a summary speech. She said that through this in-depth study, we looked back at the glorious history of Yan'an, looked forward to the new era better, learned and grasped the spirit of Yan'an and the socialism with Chinese characteristics of Xi Jinping in New Era more deeply, and further enhanced the ability of Party members and cadres to use scientific ideas and methods to plan their own work. She asked that trainees should take this training as an opportunity to make good plans for next year's work, play leading role as backbones, display new achievements on the new work platform of the Association for Science and Technology, and make new and greater contributions to the deepening reform of the Association for Science and Technology.