Release Time: September 22, 2020
On September 21, in combination with the home field activities of Beijing on the national science popularization day in 2020, the CPC Party branch of Fangshan District Association for Science and Technology organized and carried out a party day activity with the theme of "practicing the original mission and flying the scientific dream", aiming at enabling CPC Party members, officials and staff of Fangshan District Association for Science and Technology to enhance the understanding of the original mission and raise entrepreneurial enthusiasm in the process of visiting and experiencing the latest scientific and technological achievements, as well as learning and understanding the innovative thinking and typical deeds of scientific and technological workers. 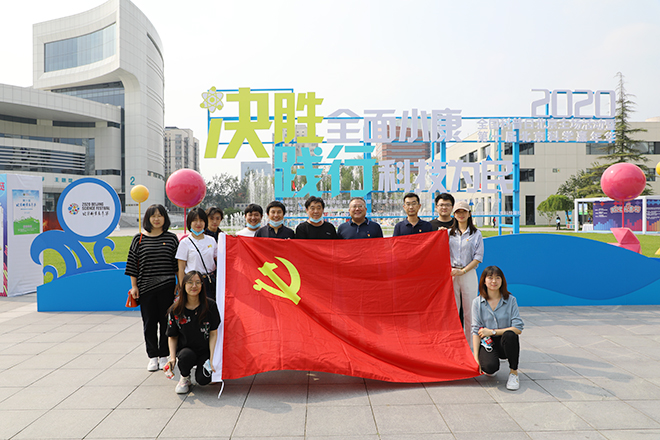 In the activity, officials and staff were organized to go to Beijing Science Center, the main venue of national science popularization day in Beijing, to visit and experience the on-site activities of the 10th Beijing Science Carnival and the exhibition hall of Beijing Science Center. During the on-site activities, CPC Party members, officials and staff went into the exhibition areas such as capital scientific and technological innovation achievements exhibition, science and technology cool products exhibition and concrete mathematics exhibition, and firsthand experienced the flexible application of the latest scientific and technological achievements in serving the people. In addition, they also attended the "Science on a Sphere" characteristic science interactive lecture, in which, through the wonderful explanation of the commentator and the vivid presentation of spherical projection technology, they gained in-depth knowledge of the deep-sea technology from ancient times to the present. The most impressive one was the exhibition of the capital's achievements in science and technology innovation with the theme of the "Game of Human against Infectious Diseases", wherein the struggle course of human against infectious diseases such as smallpox and plague was stirring, the advanced deeds of many heroic figures such as Zhong Nanshan and Chen Wei fighting against the COVID-19 were awe-inspiring and the device and equipment to combat COVID-19 with high-tech means were encouraging.