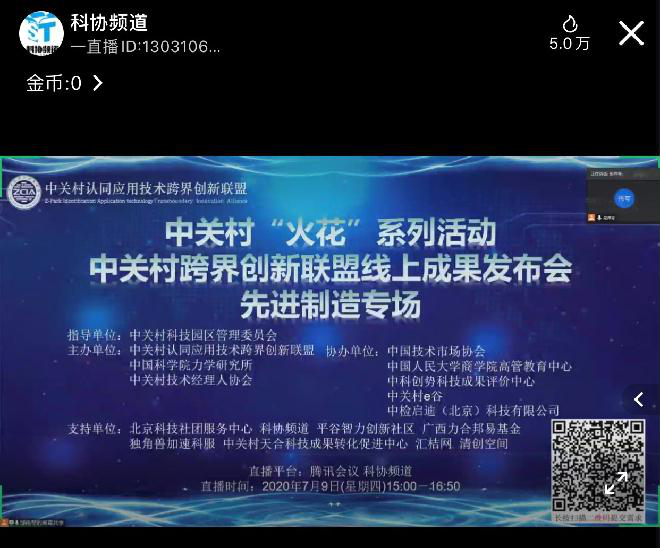 On the afternoon of July 9, 2020, Zhongguancun Cross-border Innovation Alliance and the Institute of Mechanics, Chinese Academy of Sciences, jointly with Zhongguancun's Association of Technical Managers and other units, successfully held the activity named "Spark"-An Online Achievements Presentation of Zhongguancun Cross-border Innovation Alliance-Advanced Manufacturing Only, which is under the guidance of the Administrative Committee of Zhongguancun Technology Park, with the support of Beijing’s Society Service Center for Science and Technology and other units and on the basis of the needs of enterprises. Four achievements to be commercialized in advanced manufacturing area were released by the Institute of mechanics, Chinese Academy of Sciences in the event. More than 130 people participated the live interactive activities through the Tencent Meeting, who are from the government departments (including the Bureau of Economy and Information, the Bureau of Science and Technology, Investment Promotion Bureau, the Association of Science and Technology, the Science and Technology Commission, etc.), enterprise leaders, investment institutions and institutions of technology transfer service. In addition, a total of 50,000 people watched the event on live-stream platform, Sina Weibo-Science and Technology Association Channel.

Liu Hongli, deputy director of Scientific Research Planning Division of the Institute of Mechanics, Chinese Academy of Sciences, introduced the overall situation of the Institute of Mechanics. Four teachers, Xu Yi, Wu Chenwu, Zhang Yong and Yu Gang, introduced four advanced manufacturing projects, including the green manufacturing technology of NdFeB magnetic material surface protection and its industrial application, laser charging technology, multi-phase metering technology of oil, gas and water and its industrialization, as well as advanced laser manufacturing technology and equipment. Meanwhile, they carried out full exchanges and discussions with the responsible persons of enterprises, investment institutions, government units who attended the event on the technical problems existing in the production process of enterprises and the project interested in. He said that for projects that are interested in co-operation, the division will follow up the whole process to ensure that the achievements are met in a timely manner.

In the discussion session, entrepreneurs asked questions about the application degree of technology, the equipment, capital and technique needed to be invested, the cost increase after comparing with the existing technology, the application prospect of market after industrialization, etc. the meet and the activities were pushed to a climax in scientists’ answers to those questions.