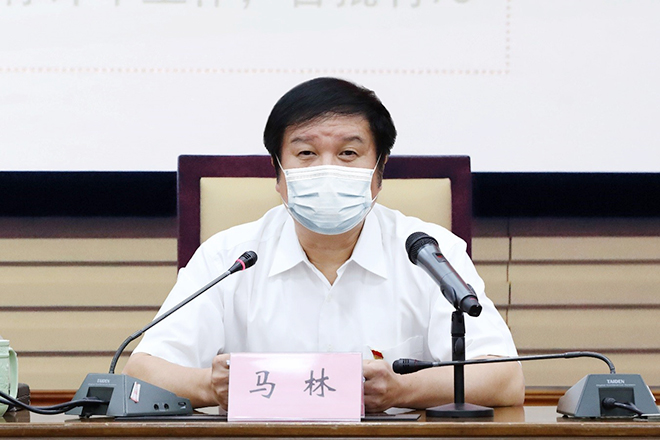 On the morning of July 9, Ma Lin, secretary of party leadership group of the BAST, lectured a vivid party class to the broad masses of Party members and cadres with the title of "Remain True to Our Original Aspiration and Keep Our Mission Firmly in Mind, to Promote a Profound and Steady Reform of the BAST’s System".

In the course of the Party, Ma Lin, taking "success always goes with preparations" as the starting point, led us to review the glorious struggle of the Communist Party of China in the past 99 years, and expounded the reasons that our Party has made great achievements attracting worldwide attention with vivid examples of the history of the Party, which lies in always adhering to the lofty goal of communism, always grasping the developing trend of the times, always formulating the principles of action scientifically, and always standing at the forefront of the history and the times.

Ma Lin said that in the past three years since the deepening of the reform of the BAST, we have persisted in deepening our understanding of mass work, of the political, advanced and mass nature of mass organizations, of adhering to the party's leadership and the right path, always keeping in line with the correct direction of reform, focusing on the main contradictions to plan the reform path, finding the right starting point to promote and implement reform, and leading the reform with party building. Committed to scientific planning, solid preparation and thorough promotion, we completed all the objectives and tasks set out in the Implementation Plan for Beijing Association for Science and Technology to Deepen the Reform of Its System, achieved solid results in the reform, and promoted the cause of the BAST to a new platform.

Ma Lin stressed that "reform is as endless as innovation". Every Party members and cadres, with the attitude and style of seeking truth, should show the abilities and keep a goal to succeed, so as to deepen the reform, make a good implementation of “stressing political, advanced and mass characters and preventing to be bureaucratic, administrative, aristocratic and recreational”, and paint a grand blueprint for the BAST during the 14th Five-Year Plan. All departments and units should lay out the long-term planning and research positioning in advance. A five-year plan that meets the needs of sci-tech workers, reflects the characteristics of the times and can lead the development of the association for science and technology should be carried out by analyzing the phased characteristics of the reform of the BAST, studying major issues and contradictions, and understanding the new situation as well as new requirements emerging after the pandemic.

Ma Lin requested all party members and cadres to further concentrate their efforts, maintain an attitude to struggle and overcome any difficulties. In the process of promoting the high-quality development of the BAST, the “political integrity, think in big-picture terms, follow the leadership core, and keep in alignment” should be maintained, the “confidence in the path, theory, system, and culture of socialism with Chinese characteristics” should be firmly insisted on, and the “core of the CPC Central Committee, the position of the whole Party as the core, and the authority and centralized, unified leadership of the CPC Central Committee" should be upheld. In the new starting point, we should remain true to our original aspiration and keep our mission firmly in mind, in order to promote the BAST to make new progress in the new platform, achieve new breakthroughs and commerce new innovation with unremitting efforts!

Sun Xiaofeng, member of the party leadership group, secretary and vice-president of the party committee of the BAST, presided over the special party class, and asked all departments and units to study the party lesson of the secretary Ma Lin in combination with the discussions in each branch, making sure a firm implementation, so as to unify our idea and gather strength to deepen the reform of the BAST’s system.

It is generally agreed that secretary Ma Lin's Party class is rich in content and combine theory with practice, which is of strong pertinence and guidance to the work of the BAST. Everyone said they will study and understand the spirit of the party class, establish the sense of responsibility as well as the rigorous and scientific style, remain true to our original aspiration and keep our mission firmly in mind, striving for a greater breakthrough on the new platform as the BAST develops. Do not forget the first heart, keep in mind the mission.

More than 80 participants, including members of the leading body of the BAST, all Party members in organs, activists for joining the party, cadres at all department levels of public institutions, committee members of all Party branches and cadres of Party affairs, and Party secretaries of the social organization, attended the class.