29News/col/col8063/index.html
Beijing Association for Science and Technology Hold an Enlarged Meeting of the Trade union Committee

The 8th trade union committee of the Beijing Association for Science and Technology will expire in September. To prepare for changing the term of the trade union, the committee held an enlarged meeting on the afternoon of July 14 to discuss the details of general election. Sun Xiaofeng, member and vice-president of the party leadership group and secretary of the party committee of the BAST, attended the meeting and addressed a speech.

At the meeting, the Work Plan for General Election of the 9th Trade union Committee of Beijing Association for Science and Technology was deliberated and approved, and the details of the trade union’s expenditure in the first half of 2020 as well as the expenditure scheme of the second half were announced. In addition, the relevant requirements for the general election of grass-roots branch were put forward. 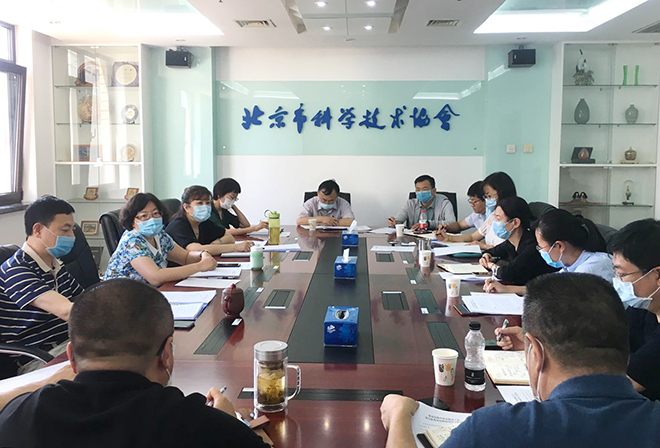 Sun Xiaofeng stressed, first, relevant personnel should conscientiously study the relevant documents of the trade union, to understand the policy, provisions, responsibilities and the process of changing the term of office. Second, the BAST has to seize the time to standardize and proceed the work of changing the term of trade union at the grass-root level in accordance with the requirements to the trade unions of municipal organs. Third, it is necessary to carefully select the candidates of member representatives, ensuring candidates with good political quality, enthusiasm for public welfare and professional ability are recommended. Fourth, all groups and branches of the trade union should make concentrated efforts to promote the work of trade unions in a down-to-earth manner. The participants studied the Constitution of Chinese Trade Union.