On the afternoon of January 23, SIMA Hong, Executive Vice President of BAST attending the 4th plenary session of the 13th Municipal People’s Political Consultative Conference, visited the venue of the group representing associations for science and technology and discussed 4 work reports including the municipal government work report with the members amid a heated atmosphere, where members actively spoke out in a way that underscored the characteristics of the sector. 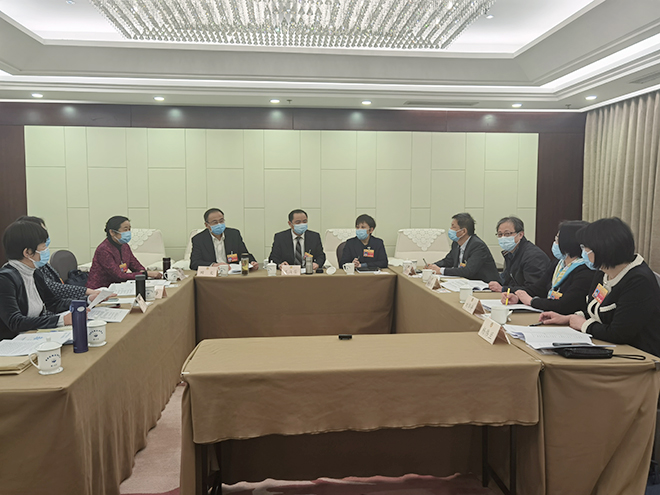 SIMA Hong pointed out that, at a time when the state pays much attention to science popularization, BAST has worked extensively on science popularization and Beijing leads the country in terms of the proportion of scientifically literate citizens. She said that the situation and challenges facing the current science popularization efforts also raised new requirements, such as the “digital divide” issue with senior citizens using smart technologies, citizen science literacy gap among Beijing, Tianjin and Hebei and construction of the civic science literacy evaluation system in the new era, suggesting that science popularization remains a long-term, arduous task. Next, BAST will continue working hard in three aspects: firstly, pay attention to improving information literacy of the elderly population on the basis of the original focus of science literacy improvement on “five key populations”, with a view to improving their quality of life and effectively driving the modernization of the capital city’s aging society governance system and governance capabilities. Secondly, pay much attention to the construction of a public service system in Beijing, Tianjin and Hebei, actively advance the collaborative development of science popularization efforts in Beijing, Tianjin and Hebei, and gradually narrow the civic science literacy gap among the three areas. Thirdly, comprehensively examine and understand the scientific attitude and interests of the general public, the public support for sci-tech development and public participation in scientific and technological activities, refrain from interpreting science literacy solely through numbers but instead demonstrate the “scientific and cultural” characteristics of the society in terms off cultural values, cultural horizon and cultural industries.