In order to deeply carry out the spirit of the talent work conferences of the CPC Central Committee and Beijing municipal Party committee, understand how Beijing Breast Disease Society serves the professional growth of S&T workers, facilitates technological innovation and builds up its standardization process, explore the development patterns of learned societies in the new era, better promote the digitalization process of societies at BAST, further enhance the attractiveness and cohesion of societies to S&T workers and increase the ability of societies to support the construction of Beijing as a world’s talent highland and international sci-tech innovation center, on the noon of December 17, Secretary of Leading Party Members’ Group of BAST Shen Jie and her colleagues visited Beijing Breast Disease Society for a field survey and paid a consolatory visit to the newly-elected CAE academician, President of the Society and director of National New Drug (Antitumor) Clinical Research Center Xu Binghe. 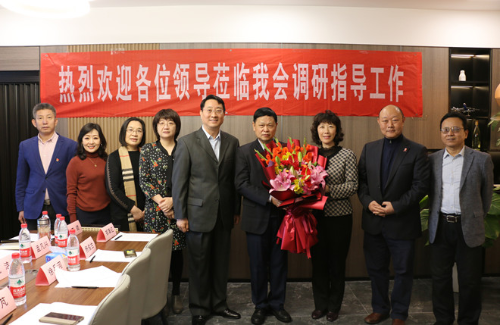 Vice President of Beijing Cancer Prevention & Treatment Society and Secretary General of Beijing Breast Disease Society Zhang Que reported how the Society combined Party construction, political study and operations during the Party history learning and education and the study of the spirit of the 6th plenary session of the 19th CPC Central Committee, how the society normalizes and digitalizes it in the process management of project management system, and how the society professionalizes its secretariat in the process of institutional building. Zhang Que introduced some work ideas for BBDS, including supporting more Society members to participate in international exchanges by working with international organizations in Sweden and Singapore, making BBDS more attractive to industry practitioners through democratic running and intensifying services, and enhancing the Society’s ability to serve technological innovation by setting up biomedicine innovation consortium, before demonstrating BBDS’s “project management system” onsite.

Academician Xu Binghe thanked BAST for multiyear support for BBDS. He believed that it would be impossible for BBDS to come so far and get recognized by industry practitioners without the generous support of BAST, active participation of its members, a powerful council and a professional secretariat. He hoped that BBDS will expand its sphere of influence not only in Beijing but also nationwide, and become able to play a role in serving scientists and technologists nationwide and raising the level of breast disease diagnosis and treatment nationwide. BBDS and its members are expected to actively provide constructive input and engage in science popularization of breast diseases under the guidance of BAST and related departments, allowing the government, society and general public to pay close attention to breast cancer which has become the number one cancer worldwide in terms of incidence, and actively participate in early screening of breast cancer. 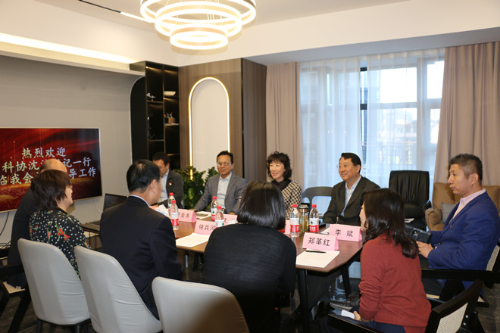 Shen Jie first congratulated President Xu Binghe on becoming a CAE academician, a high recognition of his outstanding achievements from the scientific and technological circles and the academia, which is not only a personal honor but also an honor of BBDS and of BAST. Shen Jie fully recognized the achievements made by BBDS in building up itself, serving professional growth of its members, increasing its academic standing and serving scientific and technological innovation. Shen Jie expected BBDS to play its role as platform and the mentoring role of academicians and experts to find and cultivate strategic scientists and leading scientists and technologies for the construction of Beijing as an international sci-tech innovation center as well as to build innovative teams; she hoped that more scientists like academician Xu Binghe can take the lead to drive more scientists to actively get involved in science popularization; she also expected BBDS to perfect its organizational construction and improve service ability, become digitalized as soon as possible and provide advanced managerial experience for development of learned societies in the capital in the new era, under the flag of the council and scientific management of the secretary general.

Shen Jie emphasized that following five expectations: first, further strengthen the political guidance of BBDS, carry forward the scientist spirit, preach the construction of scientific morality and study style to allow BBDS to become a medium and stronghold for carrying forward the scientist spirit. Second, actively motivate scientists to participate in science popularization to help increase science literacy citywide, transform scientific researchers into science communicators and transform scientific research findings into science popularization products to provide the society with more science popularization resources. Third, explore new ways of science and technology services, build the “biomedicine innovation consortium” into a not-for-profit platform for industry-academia-research-application integration, and realize effective alignment between membership services and transformation of scientific and technological achievements. Fourth, advance the digitalization of BAST, expand the circles of resource, friend and communication of BAST, achieve resource connectivity and sharing among 221 society foundations, 90-plus universities and more than 1000 corporate branches of BAST, lead scientists and technologists to actively get involved in economic development, get more connected with societies and listen to the appeals of scientists and technologists so as to make BAST a truly home away from home for scientists and technologists; focus on social hotspots and scientific and technological frontiers, leverage various communication channels including new media to drive the transformation of scientific research findings into important content at the service of technological innovation and science popularization. Fifth, build up BBDS as an organization, intensify its institutional building, make its secretariat more professional and increase the scientific management level and professionalism of BBDS by using modern management means and approaches. As the next step, planning and finance departments and digitalization task forces of related societies are expected to learn about digital office initiative of BBDS to provide referable experience for digitalization of BAST.