According to the requirements of the “Notice on Seriously and Effectively Holding Meetings of Democratic Life for Party Member Officials of Party and State Organs at the Section Level and Above in 2020” issued by the office of the Municipal Commission for Discipline Inspection and the Organization Department of Municipal Party Committee, on February 3, BAST held the 2020 meeting of democratic life. Keeping closely to the theme of seriously studying and implementing Xi Jinping’s thoughts on socialism with Chinese characteristics in the new era, strengthening political construction, improving political capabilities, sticking to the sentiments of putting people first, striving for the decisive victory in building a moderately prosperous society in all respects and realizing the first centenary goal, the meeting focused on improving the ability of leadership to find and resolve their own problems making full use of criticism and self criticism by following the guidelines of “solidarity-criticism-solidarity”. Secretary of the Leading Party Members’ Group of BAST Ma Lin chaired the meeting and made a wrap-up speech, while related officials of the 5th steering group of the Municipal Party Committee, the 2nd supervision and inspection office of the Municipal Commission for Discipline Inspection and Municipal Supervisory Commission and the discipline inspection and supervision group resident at the Municipal Science and Technology Commission attended the meeting for guidance. 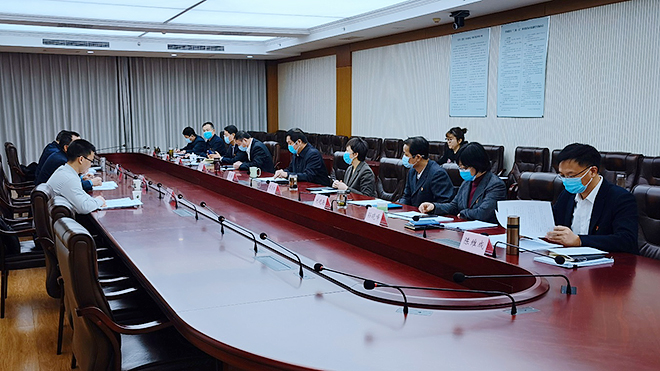 The meeting announced the results of rectification resulting from the meeting of democratic life themed “staying true to original aspirations and bearing in mind the mission” and the meeting of democratic life focused on inspection tour and rectification and the results of canvassing at this meeting. Ma Lin made a self assessment on behalf of the leadership and took the lead to make personal self-assessment, conducted self-criticism and accepted criticism from the leadership members. Leadership members then made personal self-assessment one by one and seriously conducted self-criticism and mutual criticism. Everyone could make full use of criticism and self-criticism as an effective weapon in self-assessment, as self-criticism was made thoroughly, mutual criticism was straightforward and problem solving was meant to be pragmatic and include communications, confrontations, consensuses and mutual encouragement, fully carrying forward the serious attitude of unveiling shortcomings, fully demonstrating the fighting spirit of democratic solidarity and achieving the purpose of unifying thoughts, gathering consensuses, enhancing solidarity and improving together.

It was emphasized at the meeting that all participants are required to leverage the “critical minority” role of the leadership of BAST under the guidance of Xi Jinping’s thoughts on socialism with Chinese characteristics in the new era in order to make full use of the “second half” of the meeting of democratic life and establish and improve a problem rectification mechanism covering all aspects of business. Everyone is required to advance the implementation of all decisions and arrangements made by the CPC Central Committee and the Municipal Party Committee within BAST organization with a stronger political judgment, political acumen and political execution and help the cause of BAST demonstrate new achievements and make new progress on the new platform.

Firstly, constantly strengthen theoretical empowerment and enhance the awareness of political correctness. Bear in mind the requirements of “looking at Beijing first from the political perspective”, always put political correctness first, always bear in mind “two big pictures”, act in the best interests of the motherland, internalize and externalize enhancing the “four consciousnesses”, sticking to “four matters of confidence” and achieving “two maintenances”, and always remain high aligned with the CPC Central Committee with Xi Jinping as the core ideologically, politically and practically.

Fourthly, further the development of the cause and constantly highlight the effects of remaining politically correct. Combine the “14th five-year” planning with the challenges and opportunities faced by BAST in pursuing its cause and with the building of Party member personnel of BAST, live up to the responsibility and act proactively, always keep the spiritual state of progressing and moving forward, endeavor to reflect the effects of remaining politically correct on the new developments of BAST’s cause and the efforts to serve the construction of Beijing as an international sci-tech innovation center and serve the economic and social development of the capital city, and greet the 100th anniversary of the founding of CPC with outstanding achievements.