On February 4, the “Game between Mankind and Infectious Diseases” exhibition sponsored by Beijing Association for Science and Technology was named the “top 10 science popularization works of Ceremonial Commendation•China Science Communication 2020”. 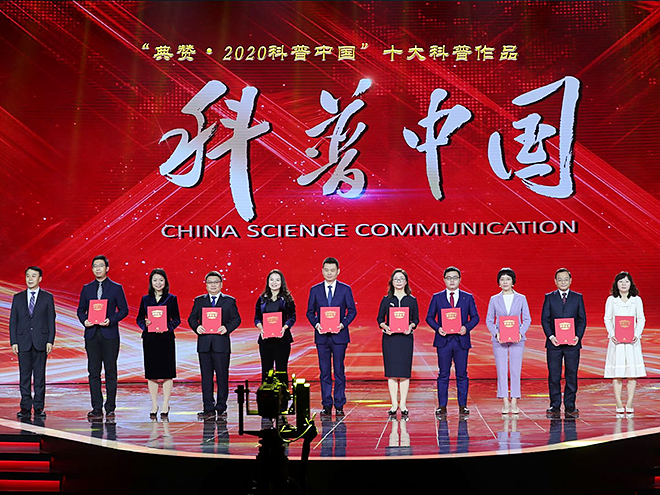 “Ceremonial Commendation•China Science Communication 2020” is a publicity and recommendation event held by China Association for Science and Technology in collaboration with the People’s Daily and China Media Group. The event takes stock of the extremely influential figures and works of science popularization and science communication events of the year, unveils “scientific” pitfalls, terminates “scientific” rumors, guides the general public to improve scientific thinking capabilities and raises the brand power and influence of “China Science Communication”. Since its inception in 2015, the event has drawn extensive attention of all walks of life. In 2020, the event was held in collaboration with influential media outlets such as the People’s Daily and China Media Group for the first time, and it is also the first time the event made comprehensive selection from categorized works and brought out the “top ten science popularization works of the year”.

The thematic exhibition was co-organized by Beijing Science Center, Beijing Development Center of Popular Science and Beijing Youth Science and Technology Center, as an important part of the regular emergency science popularization efforts of BAST and an important initiative to further enhance the upgrading of science popularization ideas and practices, drive the innovative development of science popularization efforts and contribute to the regular epidemic prevention and control. At the preparatory phase of the exhibition, BAST paid much attention to the event by seriously studying and comprehending the spirit of important speeches of General Secretary Xi Jinping at “three science and technology conferences”, carefully planning and verifying the feasibility of the event with the cutting-edge sci-tech innovations in Beijing as the medium, inviting numerous experts and scholars to dozens of discussion sessions, repeatedly polishing exhibit details and continuous improvement of visual presentation and venue layout by dozens of staff members, ultimately offering the general public in Beijing an intuitive, visual, vivid and touchable feast of science popularization.

The thematic exhibition was divided into three parts of “discovering, finding the invisible world”, “innovation guards life health” and “development enables harmonious coexistence”, held mainly in response to the COVID-19 as a hotspot incident of general concern to the public and society, consisting of a series of emergency science popularization efforts based on content and multichannel integration to contribute to the regular epidemic prevention and control. 43 sci-tech innovations from scientific research institutes were presented at the event, including Tsinghua University, Science and Technology Innovation and Development Center of CAS (Beijing), the Chinese Academy of Medical Sciences and Beijing CDC. Since its debut at Beijing Science Center in September 2020, over 100 groups and more than 70,000 persons observed and learned at the event in person, which was covered by nearly 200 media outlets such as the People’s Daily and Xinhua News Agency, with over 70 million online clicks, arousing a great sensation among all walks of life and receiving high recognition and unanimous appraise of the general public.

In the future, BAST will further guide and mobilize sci-tech workers and science popularization workers in Beijing to deeply study and implement the spirit of the 5th plenary session of the 19th CPC Central Committee, serve the overall interests, constantly drive the upgrading of science popularization ideas and practices, guide the public to develop an interest in cutting-edge sci-tech achievements and stories by holding thematic exhibitions, as well as relate to the scientific spirit and thought presented by scientists and in the sci-tech innovation process, perceive and learn scientific methods, master the ability to apply science, improve the science literacy of citizens, spark the social vigor of innovation and contribute to the accelerated efforts to build Beijing as an international sci-tech innovation center.