Giuseppe Marucci said that fruitful exchanges had been made between the two sides since the execution of the cooperation agreement, especially in terms of science and technology education and academic exchange and cooperation oriented towards teenage reserve talent of science and technology and youth academic talent. He maintained that the scientific, technological and cultural exchanges between China and Italy are close, BAST is an important partner of the Italian side and the close cooperation between the two sides also received great attention and support of Italian Embassy in China and Chinese Embassy in Italy. He expected both sides to overcome the pandemic and continue to advance the cooperation between two sides on sci-tech academics, science popularization, science education and corporate technological innovation both online and offline.

Antonella Corea，Patrizia Palanca and Lina Zaccheria shared their takeaways from participation of their Italian teenage delegations in the teenage sci-tech innovation competition in Beijing respectively and the efforts made to promote the scientific, technological and cultural exchanges between Italian and Chinese teenagers, before introducing respective current efforts to construct information science and technology associations and comprehensive schools of science, technology and economics and to facilitate the international exchanges between talented teenagers and young people. They believed the Chinese and Italian sides are highly tight-knit in terms of science, technology, culture and sentiments, expecting to build broader international exchange platforms through joint efforts. 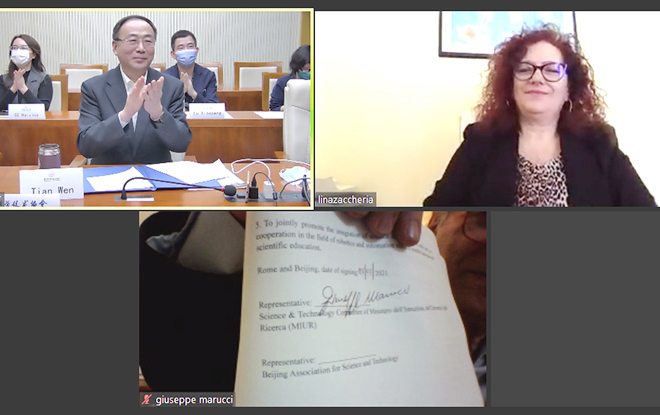 Tian Wen reviewed the friendly intercourses and close cooperation between the two sides since the signing of the cooperation agreement in 2005. He said that both sides had been building platforms for teenagers and sci-tech workers of both countries since the establishment of cooperation, with exchanges further deepened; both sides renew the cooperation MOU every five years, each time in a deeper context of cooperation, thus further solidifying and broadening interactions among teenagers, youth scholars, schools and sci-tech organizations. He emphasized that China-Italy friendship has a long history and both sides had been strengthening international cooperation on science, technology, culture and fight against the pandemic with a view to building a community with a shared future for mankind; BAST welcomes the Italian side to continue involving teenagers and college students in the teenage sci-tech innovation competition and the International Competition of Autonomous Running Intelligent Robots, etc. From 2019 to 2020, BAST created the Beijing area widely-concerned academic achievements symposium, where both sides are expected to strengthen interactions among sci-tech academic groups and top-notched youth academics and jointly build a platform for sci-tech achievements and academic exchanges between youth scientists of both countries.

After the meeting, both sides signed the “2021-2025 Memorandum of Understanding on Cooperation” on the cloud. Both sides will further intensify sci-tech innovation exchanges among teenagers and college students, take stock of contestants of previous sessions of the teenage sci-tech innovation competition, identify youth academics from them and deepen the platform for exchanges among teenage reserve talent and youth academics; both sides will strengthen international cooperation among science popularization organizations and academic groups, drive respective organizations to communicate on science popularization ideas and practices and help the corresponding disciplines and groups of the Beijing area widely-concerned academic achievements symposium conduct academic exchanges both online and offline.