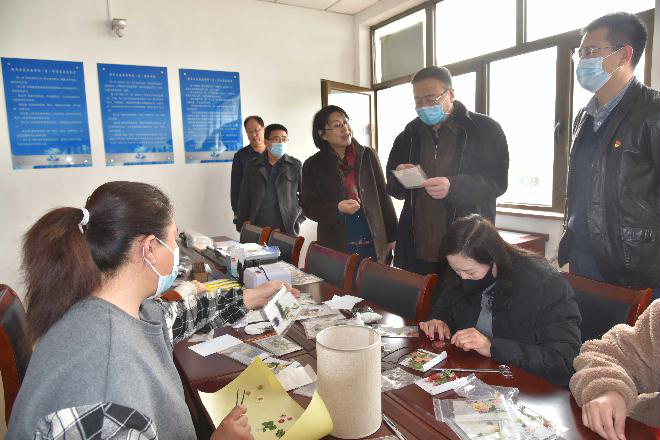 Tian Wen debriefed Liang Qi on his activities of grass-roots Party construction, industry development and beautiful countryside construction over the past year and his work ideas for next step, paid a field visit to “Lingdong Village Embossing Handicraft Studio” and talked to officials of village Party branch committee and village committee in depth. In the studio, village trainees introduced and demonstrated the embossing handicraft process and made cultural and creative products such as circular fans, desktop lamps and necklaces on the spot.

Officials of village Party branch committee and village committee thanked BAST for assigning the first secretary to Lingdong Village for assistance and spoke highly of the efforts of Liang Qi at the village in the past year.

Tian Wen emphasized at the discussion meeting the need to deeply understand that growing the village-level collective economy is an important foundation for improving the cohesion of grass-roots Party organizations and also an important way to safeguard the say of grass-roots Party organizations. Taking the first step in industry development is both very difficult and important, as it injects new intrinsic motivation into the village and reflects the collective will of village Party branches and the common intensions of villagers. Unremitting efforts should be made to make collective economy prosperous and strong.

Tian Wen said the focus of efforts of the first secretary is spot-on and very firm as he researched and planned with officials of village Party branch committee and village committee of Lingdong Village in depth, explored the possibilities of developing handicraft and undergrowth industries by relying upon the abundant resources of BAST system and working with Beijing Society for Information Technology in Agriculture, Crop Science Society of Beijing and Beijing Association for Mushroom Science, thus growing the collective economy of the village with embossing production and planting of forest mushrooms and herbs as the enabler.

Tian Wen said the village-resident first secretary is expected to both work on village-level economic construction and focus on improving science literacy and aesthetic awareness of villagers. As the next step, more resources of academic societies need to be pooled together in the interest of long-term development to make the industries in the village refined and optimum. BAST is a strong backing for assistance through cadres staying at villages and will as always provide talent and intellectual support for first secretaries to perform their tasks. Beijing Society for Information Technology in Agriculture and other science and technology societies are expected to keep following up on their efforts to fuel countryside revitalization.

During the discussion meeting, Yang Weilan said the idea of driving the village-level collective economy with the embossing handcraft industry in an adaptive manner can fully utilize the surplus workforce of rural women, further explore the local custom and culture and actively contribute to the construction of Miyun District as a demonstration area for cultural tourism and leisure. As the next step, the district association for science and technology will help the village with publicity and promotion activities through various platforms and media channels to increase the popularity of the embossing industry.