On March 26, the Party history learning and education leadership group office of BAST organized Party member officers to visit the “Great Journey—Special Exhibition in Celebration of the 100th Anniversary of the Founding of CPC” at the Capital Museum in two groups, each on the morning and afternoon respectively. Executive Vice President of BAST SIMA Hong, member of Leading Party Members’ Group and Vice President Liu Xiaokan, class-2 inspector Chen Weicheng, class-2 inspector and Secretary General Zhang Yushan and more than 230 other Party member officers from general Party branches of public institutions and social organizations participated in the activity.

This exhibition exhibits a total of about 280 pictures, photos and physical objects, reproducing significant historical events using historical materials and cultural relics and showing the revolutionary course of the Communist Party of China from Party formation and the founding of new China in a summative and concise manner by following the timeline of four historical periods including the birth of CPC, agrarian revolution, war of resistance against Japanese aggression and the founding of new China. The exhibition is uniquely designed in its form to spread the exhibition messages in a more vivid manner using digital and multimedia interactive means. The exhibition reproduces the historical process of CPC continuously exploring the Chinese approach to Marxism, fully reflects that CPC is the people’s political party and a political party that keeps abreast of the times and stays ever young, and educates all Party members and cadres to stay true to original aspirations and bear in mind the mission to forge ahead and pursue dreams on the great journey. 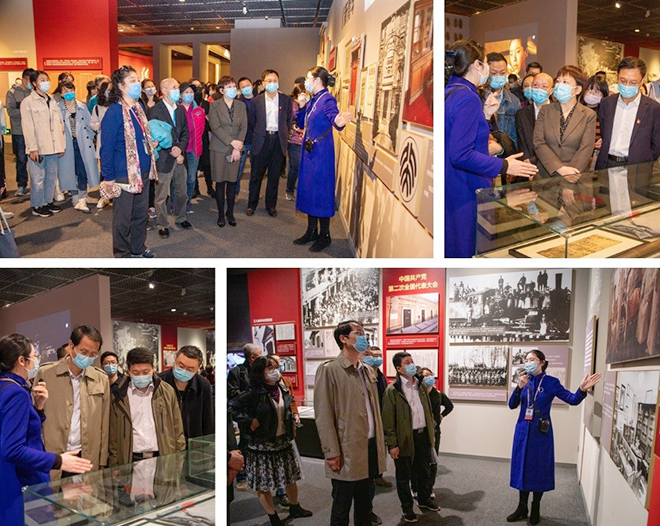 Under the guidance of the interpreters, all visiting Party member officers of BAST carefully watched the exhibited cultural relics and historical materials ranging from important newspapers in the New Culture Movement such as “New Youth” to full Chinese translation of “The Communist Manifesto”, from a doorway imitating Shanghai Shikumen building to a wood boat modeled from the commemorative Red Boat on South Lake of Jiaxing where the 1st CPC National Congress was held, from shoulder poles used by the Red Army to carry grains in Jinggangshan Mountains to the rehabilitated Xibaipo Central Military Commission War Room, and from the Common Program of the Chinese People's Political Consultative Conference to audiovisual footage of the Founding Ceremony of new China, with each manuscript, cultural relic and picture telling vividly the magnificent struggle stories and call to action of the CPC who remains true to original aspirations.

Through the profound study of the Party’s history, all visiting Party member officers developed a deeper understanding of the centennial course of hard struggle of the CPC and further solidified their ideals and beliefs. All participants vowed to draw spiritual strengthen of forging ahead from the Party history, remain true to their original aspirations, bear in mind their mission, drive BAST’s cause to make greater success on the new platform, unite all sci-tech workers in the capital city to make new, greater contributions to constructing a world-class harmonious, livable capital city and realizing the Chinese dreams of great rejuvenation of the Chinese nation and celebrate the 100th anniversary of the founding of CPC with outstanding achievements.